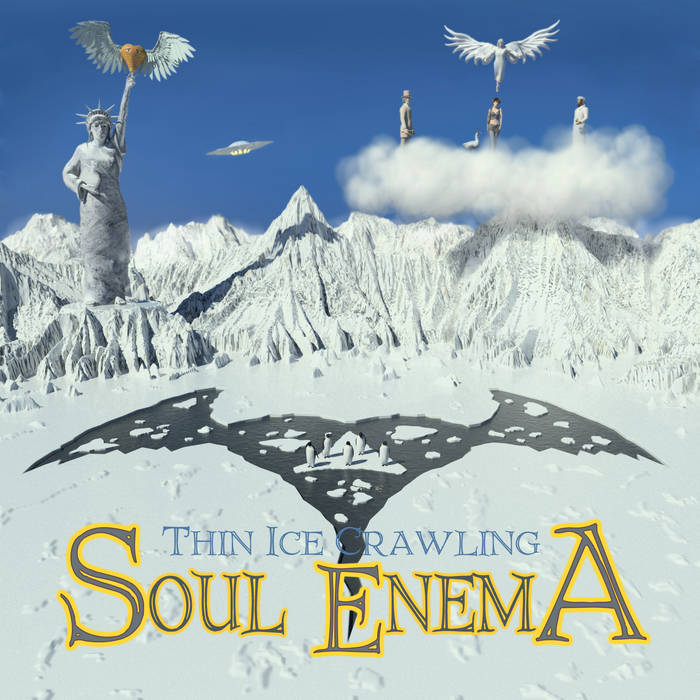 
Soul Enema was formed in summer 2001. The band is combining conventional melodic rock aspects with occasionally more experimental way of writing. Demo EP containing five tracks was released in 2003. During the next years the band was working on a debut album titled "Thin Ice Crawling". The album's style is influenced by progressive rock and metal, ethnic, psychedelic, jazz-fusion and sympho-rock elements, with a somewhat theatrical approach to the lyrics. It can be taken both on a platform of a concept story and on an individual, independent issue of each track. In the fall of 2009 the work on "Thin Ice Crawling" was completed and it was released in April 2010 via MALS Records, to the very positive international reception. By the end of 2010 it is considered to be one of the best albums of it's genre from that year. It was nominated for the "Prog Awards" Best Debut Album Of 2010 category, and by December that year entered the top 20 on "Prog Archives" Best Of 2010 List.


"“Thin Ice Crawling” is an absolute must, producing a rare consistency in musical quality. A top album of 2010, a top metal album of the progressive trend, a top album for every self-respecting music lover" (c) "Music In Belgium" web-zine


"Do yourself a favor and go get this gem of an album. I am astonished that two of my favorite albums so far this year have emerged from the Israeli prog-metal scene. After the great (but more extreme) Orphaned Land new album, now this one… Soul Enema " (c) "Proggnosis" web-zine


"Thin Ice Crawling" album by Soul Enema is not about playing the safe ground, it's definitely more about taking risks. From the dark, theatrical vibe in the lyrics and elegant, renaissance-inspired melodies of the past, to the modern, futuristic heavy sound, Soul Enema is here to let it go at anything that seems to be interesting and seems to fit the concept well. At one time it can be into some familiar elements from progressive metal and rock, European folk and oriental ethnic music, at other times it flows into some electronic and psych touches, jazz-fusion and flamenco patterns, and what's not - hey, there's even some obscure grind-noise hidden track you may find somewhere there. However, there's one thing the band seems to know well - an experimentation should go hand in hand with strong melodies and themes, and not instead of them. And that's the pleasing point of the album - the right balance to carry you through the ice shelves without falling into banal cliches on one hand, and without running into some boring soulless shred fests on another... According to lyrics and a story line, there's a common "thin ice crawling" fate line that goes with the heroes of a plot. With every step and every twist, the burden of a Gordian Knot becomes harder, the grip of madness becomes stronger, and reality slips further away out of control. Is it just a little nightmare, or maybe a reflection of the world around us? No answers are given. Anyway, ironic or serious, the lyrics here manage to harmonize with the music in a natural way, adding a bonus emotional dimension to a sonic frame. So, in the bottom line, it's like in a twisted black light theater - you'll have your colorful hour-long journey, and while it may be exiting, fragile or dangerous stuff coming at you out of the dark, it's probably never a dull moment in any way.

Bandcamp Daily  your guide to the world of Bandcamp